Way up north in neighboring Canada, skirting the 50th degree parallel north from the Niagara escarpment in Ontario with its calcerous soils and continental climate, to British Columbia in the west with its distinctive alluvial soil landscapes stretching across its more than 600 miles, Canada is making world class wines. Near the northern edge of where the vinis vinifera will ripen, recent generations are making tremendous advances in producing what can be the very best examples of established wine varieties. The grape varietals are dominated by Pinot Gris and market pleasing Chardonnay; you'll find Merlot and Pinot Noir, and those typical international varietals are here too....Cabernet Sauvignon, Syrah, Riesling and Gewurtztraminer, etc.

Regulatory control comes in the form of the industry's  1999 Vintners Quality Alliance, or VQA; wines so declared have a minimum of 95% of the grapes coming from the region(GI) stated, and an 85% minimum from the declared harvest year(which is important when northern weather suddenly turns).  The board controls grape varieties and ripeness, applied winemaking standards, established sensory and chemical criteria, and consumer labeling. Standards have not been established for vineyard density, yeast types for fermentation or wine aging, thus allowing for continuing experimentation and innovation.  Wines labeled VQA are distinguished as typical of their grape variety and recognized growing region. 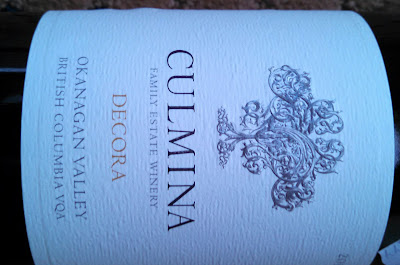 Today's British Columbia wine industry has grown from a handful back in the 1960's, to more than 350 province wineries today, producing an annual economic impact of around $3billion.  The vine acreage in the province has grown as you may expect; more than 10,000 acres planted to more than 75 varietals.  Those established quality national standards, the broad diversity of the B.C. landscape and cuisine, and growing consumer demand have helped to promote this emerging wine region.

Within the most productive of wine Canada provinces, there are boutique wineries of the southwesterly Gulf Islands;  the maritime climate challenged by the pioneers of Vancouver Island so close to an international metropolis; there's the mixed soils of the fertile, east-west oriented Fraser Valley that follows the great river; heading east to the emerging border region, the Similkameen; and further eastward to the bountiful, semi-arid Okanagan river valley with its alluvial soils.  British Columbia would seem to have it all.

One of the warmest regions in all of Canada, it lies in a broad rain shadow of the Cascades;  the Okanagan Valley is blessed with hot long days during critical ripening cycle. This world-class growing region today overwhelmingly produces most of the wine from a most picturesque and outdoor lifestyle province, with wines increasingly recognized on the world stage for their acid-driven purity and resonate qualities.  Hours from metro Vancouver, it is one beautiful region for eco-tourism, too.

Ice wine may be the historic marketing tool for the wines of these provinces, and as historically accurate as it is, this too is changing. World-wine producers in the extreme northern latitudes have long found something special about picking frozen berries left on the vine thru the depths of winter. Freezing dehydrates reducing water content, sugars concentrate, in frigid conditions the fruit is laboriously picked berry by berry.  Here, without varietal restrictions, these wines are sugar heavy, but strive for an acid balance, drop by drop, to create a delicious nectar, one (expensive) bottle at a time.  Unfortified, Canadian ice wine tends to be low in alcohol, with broad flavor profiles that invite experimentation even in this historic category.

Even with their Prohibition-era alcohol laws there is evidence that the industry is growing in a progressive, positive direction, Oh sure, they have the same problems of expensive land and expensive labor, and strong, physically-separated provincial identities.  But, they also have climate change increasing chances for reliable, regular ripening, and sustainable farming the new norm.  There is the increasing fame of their world-class wines, and the increase in foreign investment, as well as sustained overtures for more favorable trade & tariff laws . With a current measure to regulate beer sales at fast food restaurants, can a chilled glass of British Columbia Riesling at the local Canadian Taco Bell be so far behind?  Those would be some beautiful bottles.
Cheers!